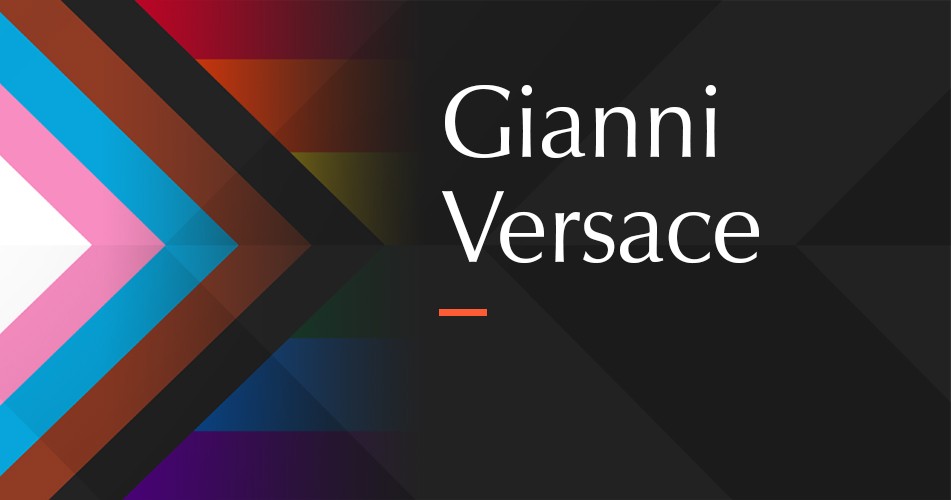 LGBTQ+ Trailblazers: The Man, The Myth, And The Legend, Gianni Versace.

The fashion world would not be the same without Versace. A symbol of eccentricity, extravagance, and baroque elegance. One of the brands that have made Italian style and design famous all over the world.

Behind the brand, there is a man, whose life is now myth and legend. Gianni Versace.

Born in 1946 in Reggio Calabria, in the south of Italy, Gianni grew up with his elder brother Santo and younger sister Donatella. Fashion surrounded Gianni’s life since he was a child. His mother was a tailor who Gianni used to help at her atelier where he learnt to design and sew women’s clothing. Symbols and antiquities of ancient Greece, prevalent in his region of Italy, as well as literature classics such as the Odyssey and Iliad, and Greek mythology impacted on Gianni’s education and later strongly influenced his creative work as a fashion designer.

In 1972, Gianni moved to the capital of fashion, Milan, where he worked as a fashion designer for other brands, such as Genny, Byblos, Complice, and Callaghan. Six years later, in 1978, he founded his own and independent brand, Versace, together with his brother Santo – later his sister Donatella also joined – and created Versace’s first women’s collection. The symbol of Versace was and still is the famous Medusa, which comes from Greek mythology. Gianni explained the reason of his choice as follows: “When people look at Versace, they must feel terrified, petrified, just like when they look in eyes the Medusa.”

“When people look at Versace, they must feel terrified, petrified, just like when they look in eyes the Medusa.”

Gianni wanted his brand to attract attention, he wanted to amaze, and not leave anyone indifferent to its fashion. The myth of Versace’s Medusa was a dive into the past of Magna Graecia with a modern perspective.1

Versace quickly became a sensation on the international fashion scene, combining luxurious classicism with theatrical designs, which broke the rules of fashion. Gianni employed vivid colours, bold and baroque prints, and combined skilful tailoring with innovative materials. In the 1980s, he even devised a unique metal fabric, called Oroton, which he manipulated to create shimmering carapaces whose fluidity recalled classical draperies.2

“That is the key of this collection, being yourself. Don’t be into trends. Don’t make fashion own you, but you decide what you are, what you want to express by the way you dress and the way to live.”

Versace’s couture designs were created for the super-rich, but also rappers, singers, actresses and extravagant celebrities – Madonna was one of the first celebrities that Versace dressed.3 Through his fashion, Gianni promoted audacity and unicity. In commenting on one of his last collections, he said “that is the key of this collection, being yourself. Don’t be into trends. Don’t make fashion own you, but you decide what you are, what you want to express by the way you dress and the way to live.”

Instantly recognisable, Versace’s fearless designs marked the 1980s and 1990s4 and were definitely a part of my memories as a little girl growing up in Italy in the 1990s. Gianni’s revolutionary creativity challenged the status quo of women’s fashion and broke taboos surrounding the LGBTQ+ community in a country which was and can still be rather conservative. Admittedly, he was one of the first fashion designers to come out in Italy.5 Although many turned against him, he inspired so many people within the LGBTQ+ community worldwide.6

Like a star that suddenly disappears, Gianni tragically died on 15 July 1997. He was murdered outside his South Beach home in Miami, Florida, by a spree killer. His death sent shockwaves through the fashion world, but he left an incredible legacy.

Gianni freed fashion from conformism, giving it imagination and creativity, and he remains a decisive icon in the history of fashion.

Gianni’s legend continues with his sister Donatella as Artistic Director of Versace. Today, Versace remains a global powerhouse and “represents its heritage through its strong and fearless designs, while addressing a new global audience which continues to strengthen Versace’s position in contemporary culture.”7

Read more about the Versace history here including their Palazzo Versace luxury hotel projects, and their latest collections.